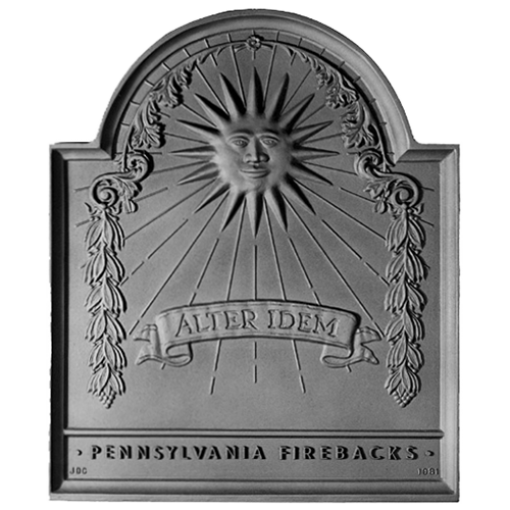 The Franklin Sun fireback was the first design created for our initial production of original firebacks in 1979. It was intended as a homage to Benjamin Franklin, his Stove, and the first firebacks produced in Pennsylvania for James Logan in 1728.

The frame and festooning of this fireback closely resembles a series of eight firebacks cast for James Logan, Colonial Secretary for William Penn, at the Durham Foundry. These firebacks are thought to be among the first iron castings made in Pennsylvania. Cast in 1728, these firebacks can still be seen at Logan's historic House "Stenton", in Philadelphia.

The Sun face with sixteen rays and a scroll engrossed with "Alter Idem" is very similar to those on Franklin's famous stove of 1744. “Alter Idem or Another the Same...warms when we please, and just as we desire.” A recent discovery in a letter from Franklin's friend Hugh Robert's points to the fact that this design was actually preceded by a pattern made their mutual friend, renowned silversmith and electrical experimenter, Philip Syng, Jr. (at the time this fireback was produced this fact was unknown to the artist who is a descendant of Philip Syng). Unfortunately only one example of the "Alter Idem" model, and none of Syng's pattern are known to exist.